Compact and electric folding bikes, wether they fold or not, all means pretty much the same: they are smaller then the average bike and this set them in a category of there own.

Electric folding bikes have flooded the market in recent years, not a lot of them were from good quality but it hopefully it is all starts to change.

In recent years, the most successful folding bicycle companies has entered the e-bike market after some hesitation. Dahon already has it's Boost e-bike and The Electric Wheel Company offers to convert a basic Brompton to an electric bike by adding a powerful electric front hub motor. 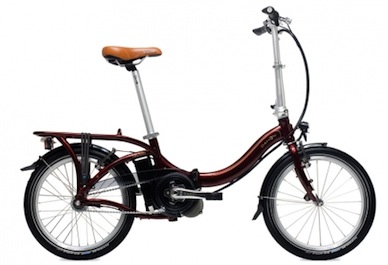 In comparison to other e-bikes, electric folding bikes can weigh much less even without being manufactured from a super light weight material like carbon-fibre. That's mean that you can get a reasonably light e-bike at a reasonable price.

I've bought my e-bike from a nice lady who bought a foldable Dahon Speed with an electric kit add-on. She wanted to use it in combination with her train commute. The applied rule of this specific train company about folding bicycles is that you have to fold your bike before entering the gates of the train station.

What this lady was found out is that she just couldn't carry her folded e-bike with her. It was just too heavy and that's why she decided to sell them. This bike weigh 12.6 Kg without the electric kit and about 20 Kg with the kit.

Great addition to other means of transport

It can be folded into you car trunk or put beside you in the train and when you will be on your way with your e-bike inside the city you will reach your destination very fast, you won't sweat and you won't have to look for a parking place.

Check whether the folding process became cumbersome if not impossible because of one of more of the electric components. Check that the bike is folding completely and that the battery or the motor do not interfere. You will have a hard time rule it around in it's folding position if the bike is not folded the way it should be and you maybe even won't succeed putting it in small places that otherwise you could have store easily.

Special notice about this issue should be taken if you order a conversion kit and install it your self or with a help from you local bike store.

Obviously, if you didn't ever ride a (electric) folding bike. Test ride a few of them. The tires and wheels are smaller and narrower and the wheel-base length is shorter. Also, the seating posture is upright (similar to urban bikes). Get the feeling of a folding bike with and without the electric assistance.