There are two points of view that are related to the chinese electric bike market.

The first one is about China super size e-bike market and the second one is regarding the quality of Chinese electric bike. 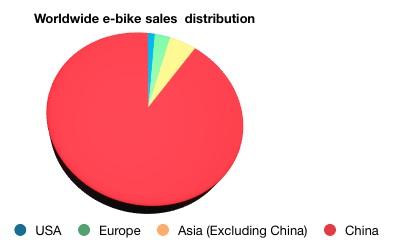 Electric bike sales have grown far faster than the sales of any other mode of transportation in China, from a modest 150,000 units sold in the late 90s to more then 20 million today. That’s three times as many as the most optimistic projections for cars sales in China for the near future.

Therefore, the implications of this technology on China, both positive and negative, on urban traffic, industry development, energy use, and many other aspects, are huge.

The extraordinary growth of the e-bike market in the late 90s to the present is due to a combination of:

E-bike technology, specifically motors and batteries, improved significantly during the late 1990’s. Simple technology, a vast supplier base, and weak intellectual property protection made it easier for e-bike makers to enter the industry, increasing competition and driving prices down.

All in all, there is an astonishing number of several hundreds companies manufacturing electric bikes in china nowadays..

Also, the weak protection of intellectual property caused more companies to increase there R&D efforts as this was the only solution in fighting against the law violating companies.

Many big-brands bicycle makers have many factories in China. For example, Giant, a leader in bicycling manufacturing, have a couple of factories.

Electric bicycles are a mode of transportation that provides high levels of personal mobility at low cost. The improving economic in China allowed many to buy e-bikes.

The typical chinese electric bike users would use a bus or a bicycle if s/he wouldn't own an electric bike. In China, it is a higher quality mobility option in comparison to public transport.

At 1500 to 3000 yuan (about 180 to 360 US dollar), an electric bike is buyable at a small fraction of the cost of a car and it is becoming affordable to more and more chinese people.

Apart from the reduction of e-bike prices over the years, gasoline prices rose and electricity prices in rural areas dropped, making e-bikes more competitive economically with alternatives like gasoline-powered scooters.

Regulations and the urban fabric

Electric bikes allow people to commute for longer distances and carry more cargo. It becomes an important advantage as China's cities are expanding more and more.

Electric bikes beat subways for convenience, buses (and in many cases also cars) for speed, and both when it comes to health concerns: the overcrowded transit system is feared for its potential to spread disease (e.g. SARS).

Electric bikes have improved the mobility of the elderly, who often have the responsibility of transporting children.

Some local government policy motivated by energy and air quality issues created favorable conditions for e-bike growth but other have banned them altogether, alleging environmental drawbacks and concerns about public safety.

Therefore, e-bike penetration is noticeably different from city to city. Some cities have low adoption, like anti e-bike Beijing (<10%), while others have high adoption, like pro e-bike Chengdu (>50%).

The lack of growth in “anti e-bike” cities is an important lesson on the powerful impact of regulatory policy.

In smaller cities and countryside where income rises, e-bikes may eventually replace the bicycles which are still the potentate mode of transportation.

The two sides of the e-bike coin

Some people advocates that e-bikes will continue to grow in popularity as income rise and cities expand. It is clear that income is not the only factor contributing to the popularity of electric bikes; their performance characteristics and built in advantages make them a popular mode for all income classes.

But, we can't neglect that fact that China is following the path of Western countries, rapidly redesigning its cities around the automobile. Houses are springing up in the suburbs, just as they did in the West decades ago. The automobile is king in this model, because in the absence of extensive public transit, cars are the only way to get from distant suburbs to offices and industry parks. 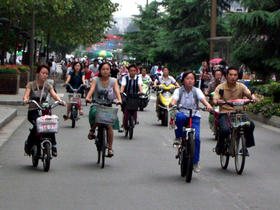 Why are this Asian e-bikes are so damn cheap?

There are probably two reasons for that. And the real answer is found somewhere in between.

So don't be fooled by the price tag. In the long run, it can cost you more than a quality electric bike.

But, on the other hand, it's not always the case and you can purchase an e-bike which is going to be just fine. You just have to make sure to look hard, know what you want and research.

If you decide to buy an electric bike, a conversion kit or individual parts from China, you should think about the following issues: