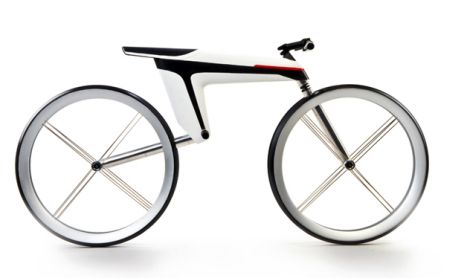 How do you build an electric hybrid bike without wires? By using the frame itself as a conductor.

You can do this by using a carbon fiber frame. The carbon is conductive so you can theoretically generate electricity and transfer it to the motor and the lights through the frame.

The HMK 561 is a bike just like this. It is made from a one-piece carbon frame, and has two motors that are located between the dual rims at the front and back of the bike.

This bike also incorporate regenerative braking. The cover is made from a variety of isolated fibers that run parallel to each other. They act like a capacitor. They are being charged in the case of braking or when going downhill. I think that it is a dramatic innovation because in that way the "battery" is part of the frame and it is not adding any weight and it can be incorporated very elegantly to the bike.

On the picture, you may note the absence of gears and chains. The bike is designed to turns the wheels using a counter-turning axel instead of the familiar propulsion mechanism that is used in all the bikes.


The surprising absence of this parts may help us in three ways:

This bike maybe sound too futuristic and far fetched but as far as I understand, the designer Ralf Kittmann has a prototype and it was exhibited in 2008.

If you scroll down to the bottom of his homepage, you will see a picture from the exhibition. I don't know anything about the capabilities and features of this demonstration bike.

Carbon fiber is not only conductive but it also super lightweight and strong. That means that this bike has the possibility to weigh less (with the electric components on it) then a standard non-electric bicycle. 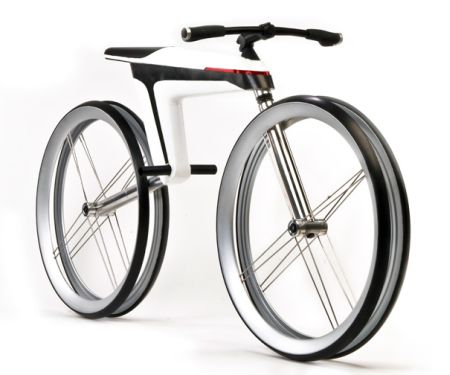 Here is the designer's description of the bike:
"The one-piece carbon frame was especially developed for braiding machines which allow for a fast, efficient and cost-effective production. Suspension and bearing are integrated in the frame during the braiding process."

When I first read about this unique bike, a couple of questions have risen regarding the feasibility of really manufacturing this bike with all the features that have been written above:

I don't have the answers but I hope that all or even part of the features will be in one from or another in our futuristic e-bikes!