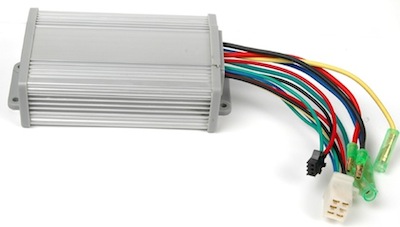 The ebike controller is the brain of the e-bikes. It is connected to all the other electronic parts such as the battery, motor and the throttle if exist. It takes all the inputs from all the other components and determine what should be signaled to them in return. 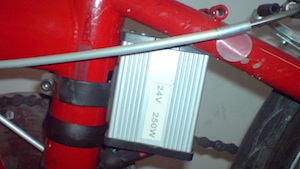 The controller has to be fitted to the other parts. You can't just buy one and connect it to any motor or battery out there. At best, if you do this, the system wouldn't work but there is also a good change that you will burn and ruin the other parts. 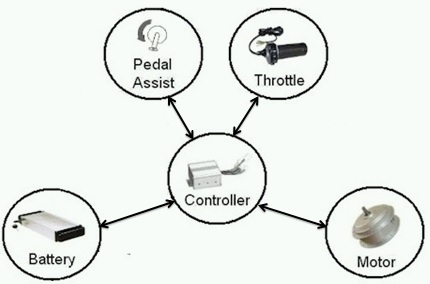 First of all, the controller need to be fitted to the propulsion system: Pedelec or Power On Demand (Throttle). It's internal circuitry has to know whether to just drive a certain current and voltage to the motor based on the input from the throttle or it has to use some sophisticated measurement of the human power in order to know how much power should be headed to the motor.

Second, the controller has to make sure not to over-stress the batteries. And in plain words, giving a nice treatment of the battery.

The Li-Ion battery, for example, is very sensitive to over discharging.

It is a very important task and most of the advanced controllers in today market is taking care off that.

Here is a bunch of examples of what the controller should do to protect the battery:

Third, controlling the motor. Based on the inputs from the battery and the throttle/pedelec, signals are being sent to the motor to ultimately move the bicycle.

The controller have to make sure that the those signals would not overload the motor.

Each type of motor requires different signals. Eventually, by varying the magnetic field or the current of the motor's coils the bicycle speed is being changed.

For example, in the case of the brush motor, A component with the name: phase width modulator (PWM) take the signal control from the Throttle or from the measurement of the human power and turn it to a certain waveform with a certain voltage and frequency, which determined the motor speed:

Forth, in some advanced system, you can control not just the level of assistance but also the level of regenerating (REGEN). In this systems, the controller is designed to turn the motor into a generator and supply energy back to the battery.

The best time to use this kind of system is:

If you are familiar with the Toyota Prius, this are the exact same technology.

The efficiency of this kind of system is fairly small and it is not clear whether the additional complexity really worth it. The Bionx kit is the most famous kit which incorporates a regenerating ability.

Future developments to watch for

In the early days, the inside of the controller was made from individual parts, like: capacitors, large transistors and resistors. This was done mainly because of the fact that unlike computer chips, the bicycle controller has to deal with large currents and voltages. Therefore, there is a lot of heat that needs to be dissipated. In the past, the technology for manufacturing a chip the can control such large currents was not exist.

The modern controller had made a long way. Most of the components are found one one tiny chip. The chips become smaller and smaller and handling the large heat is taken care off even without a expensive elements such as heat sinks. Likely future developments: