Although there is a boom in the electric bicycle market, it still stands against a couple of barriers. I collected a list of research on such barriers from some articles and blogs. At the end of this page you will find links to the articles from which I did my research, you will find in those links a more detailed and broad explanations regarding the difficulties and what can be done to cross them successfully. 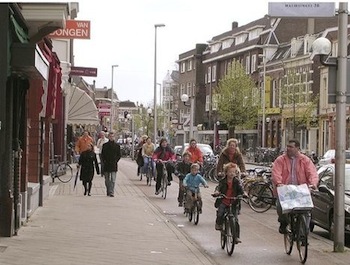 Most of the cities around the world don't have such a beautiful system or anything close to it. Bicyclists, therefore have to cycle on roads or together with the pedestrians. This barrier stops many people from taking there bicycles for a spin around the city. Many afraid that they will be getting hit by a car or even hit other persons on the city street. The common perception is that cycling in city streets is unsafe and I must agree. In my city, it can be quite unsafe to ride my electric bicycle.

And if I've already mentioned Amsterdam, let's take a look at a short video to see another great demonstration about how a very good bike system look like: (This is from another city in the Netherlands)

This is an ordinary Wednesday morning in April 2010 at around 8.30 am.
The sound is original.