Some e-bikes have throttles which allow the rider to move forward without any pedaling, other pedelec e-bikes won't move without the rider pedaling. Either way, most riders eventually end up pedaling anyway. Except the exercise benefit of pedaling, it also increases the range and the speed.

Adding a small electric motor to a bicycle is a great way to flatten out the hills or heavy winds. It allows regular people to use their bicycle to get from A to B in most of their travels (which they otherwise won't able to make) instead of burning gasoline in other heavy vehicles.

Most e-bike riders aren't out-there to race. It just regular people that use their e-bike to get from A to B, they usually just want to enjoy their ride, not to compete with anyone. So who are they cheating against exactly?

There is no any actually evidence for any increased risk involve with riding an e-bikes.

The dangerous element of cycling is usually involve the risk of getting hit from other heavy vehicles. It is demonstrated in cities all around the world that when cycling traffic increase, the accident involving cyclists decrease.

If anything, e-bikes are safer then conventional bikes. They can maneuver and accelerate faster from any suppose range and they help cyclists to keep pace with the traffic.

Myth #4 - e-bikes are just the same as electric moped

An e-bikes is basically just a conventional bike with an electric motor attached to it.

Let's compare why an e-bike is certainly not an electric moped:

The graph below consists of two parts:

The horizontal axis describes the position of the crank, starting at the top.
The vertical axis is the overall power (rider+motor).

The numbers at the side (0-100%) describe the amount of the motor assistance. In case of a pedelec, it is the assistance level.

In the case of a power-on-demand system, it is obviously pretty hard to adjust the state of the throttle to achieve a constant speed like what you would get from a high quality pedelec. 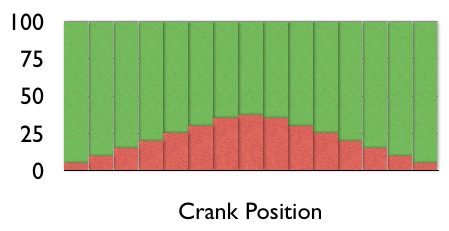 Myth #6 - e-bikes are for old people or unhealthy people

It's true that many e-bikes are targeted towards older people but these days there are plenty of other models being sold. Urban electric bicycles, mountain electric bicycles. Just name the bicycle type and there is a electric version of it.