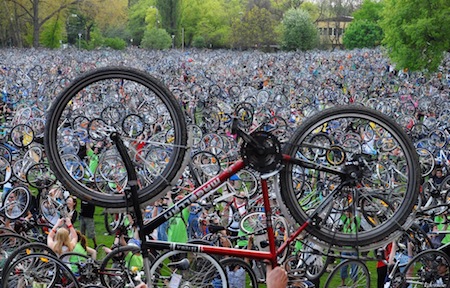 Critical Mass is a bicycling event founded in 1992 in San Francisco. It is usually held on the last Friday of every month.

A Mass is created when a group of riders comes together to ride. The riders simply pick a date, time, and location for the ride, publicize it, and this is how the ride is born.

At any time during the Mass, you are free to leave, stay, stop, or just do anything else!

The Mass is all about celebration and everyone can join. You can drive a car the whole month and join. You can be a bicycle advocator and join. It doesn't matter. At the Mass, there are no differences.

The Mass, is just that...a bunch of bicycle riders. The point of the Mass is the Mass.

The main website about critical bicycle mass is: critical-mass.info. The website is not updated for a couple of years now and for good reasons. Log on to read more about it.

Also, if you want to read further how to start one log to: How To

Every city has a different style and there are over 300 Masses in cities around the world. Here is, for example, the website of the critical mass in London andChicago and also the official website of naked bike rides: World Naked Bike Ride.


In the Critical Mass, there are no:

The Mass takes a different form from city to city,

It can be as big and as massy (By police intervention) as in this clip:

Or it can be as small and peaceful as in this clip:

A Mass can serve as a way to promote the use of electric bike and expose the e-bikes to more people who are not familiar with them.

In every Mass, there could be a couple of electric bikes which are there for people who want to experience how to it feel to ride on an e-bike.

Also, a good idea is to pass through e-bikes dealerships. In that way, more people will see what e-bikes are all about and people with electric bikes will be able to charge the battery.

Still We Ride is a documentary that captures the joyous atmosphere of an August ride before the arrests began and the chaos that followed. It recounts how this ride first started in San Francisco over 10 years ago and chronicles the police crackdown and resulting court battles in New York over the last seven months. The movie takes on issues of civil liberties, surveillance, the power of mainstream media, and the benefits of alternative means of transportation."