Take the following description of this crazy ebike with humor…

Designer Yannick worked on a concept bike to make cyclists free from daily worry. Though the bike is not available for sell, its prototype show how things can be added to make the cycling experience much safer. This bike holds some weapons for cyclists who feel that cycling in a busy road is risky, and keeping the bike safe from thieves is a hard job.


The cycle insurer ETA.co.uk did a survey on 800 cyclists about their bad experiences of cycling. From this survey ETA found that most cyclists hate the situation where they are cornered by other vehicles on the road, the second bad experience is the poor road condition, third one is stolen bike, and forth one is icy terrain or snowy road. So to solve all those problems, a couple of things needs to be added to a normal bike. The designer Yannick tried to solve all of it at once, and he designed a product which he called the “BOND” bike. The name does not have any relation to James Bond, though it has some similarity of Bond’s gadgets or vehicles. What are those similarities?? The answer lies below:

Second similarity is caterpillar track to make the ride comfortable in the poor road condition and fight the potholes in the terrain.

Third similarity is an Ejector seat!! Ejector seat on a bicycle? To catch whoever try to steal the bike. The ejector seat can be triggered from distance and it will displace the thief from the bike. 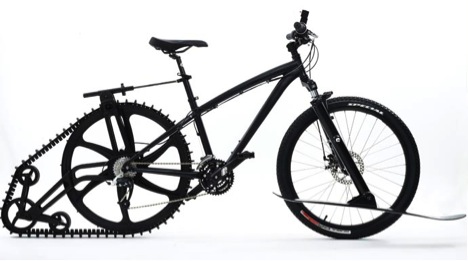 So the features of this bike in short are: